What are Nano Influencers? Definitions, Examples & How to Find Them

Marketing data also confirms a steady rise of smaller influencers (Micro and nano) overall. According to CreatorIQ, in 2016, for every macro influencer campaign, there were three featuring micro or nano influencers. In 2018, that number tripled. And as Influencer Marketing grows in popularity, so will the still untapped breed of Influencers: “Nano”

Before we dive into Nano Influencers, What or who exactly is an Influencer?

With more people falling into the “influencer” category nowadays, this question seems more relevant than ever.

In simple terms, an Influencer is someone who wields Influence.

Now, who is a Nano Influencer?

For better understanding, here’s how a New York Times article defines nano influencers: “Everyone who’s on Instagram has that friend who is just really popular and is racking up ‘likes’ and comments and has great content. They’ve probably never worked with a brand before, but they’re just really good at social media.”

How are Nano Influencers different from Micro-Influencers?

Nano Influencers do not have glamorous accounts or profiles. They have no need to polish their profiles or attract marketers. They are ordinary people who have a flair for being social. Their content is not photoshopped or edited and they have a real connection with their community. Their follower count could be low but their engagement rate is higher than most macro or micro-influencers.

A typical nano influencer connects with their audience or followers by reviewing a product or service and their conversion rate is naturally high due to the trust they’ve built.

A micro-influencer with a larger following fits most of the above criteria but their engagement rate still falls below a Nano Influencer.

How many followers do Nano influencers have?

Nano Influencers tend to have a smaller number of followers in comparison to micro-influencers, sometimes even less than 1,000 followers. This new breed of influencer wields influence within their community or a very particular niche. But any individual who has 1000 to 5000 followers can be considered as an optimal candidate for nano influencer marketing.

The above nano influencer who has 2.4k followers, engages with her friends and followers. Her caption for the post goes something like this: “I wanna get dressed up and go on a date. Like real fancy-like! Borderline opulent and dressed up. I want @dylanxmakeup to do my make up. I wanna wear a @beyonce Freakum’ dress that hugs all the right curves.” Notice how she’s tagged the brands she’s showing on the photo as well as the caption. But the post is not seen as promotional.

The whole process of “influence” is merely seen as a friendly exchange here. Meanwhile, Micro or Macro influencers (who had more than 10,000 followers) do not get to this level of engagement on social media as their profiles will have hundreds to thousands of comments which they cannot individually respond to.

Why do Nano Influencers matter?

Back when influencer marketing was still growing, brands and businesses sought out influencers with large follower counts in order to ensure that the content achieved the maximum number of audience. However, as the industry began to evolve, it was revealed that a higher number of followers doesn’t necessarily mean higher engagement. Also, brands have become wary of fake followers and spammy bots. Plus, social media users began to show a preference for “unfiltered” vs. “Insta-perfect” content.

Why should brands choose Nano Influencers?

It’s 2020, and it’s high time your brand got on the influencer marketing bandwagon. Using Nano Influencers to promote is a great way to start.

Authenticity: Influencer marketing patterns have proved that there is no need to be a world-known celebrity to affect consumer buying behaviour. With a great number of sponsored posts on Instagram and every other social media platform, modern customers trust real, authentic personalities more than ever.

Easier to find and reach: Logically, ordinary people are much easier for brands to reach out and deal with than your typical Hollywood or YouTube celebrities. It is easier to work with nano influencers as the conversation you will have will be very friendly as opposed to formally reaching out to power influencers.

Cost-effective: Nano Influencers are cheaper too. They are definitely budget-friendly when compared to Micro-Influencers as they don’t ask for huge monetary compensations. A free product or a small commission could work. So it’s no wonder that ‘nano influencer’ campaigns are on the rise.

Credibility: And, what they lack in audience reach (typically, a “nano” will have no more than 5,000 followers) they make up for it in intimacy or real-time personalization of any brand. When a Nano Influencer recommends a brand or product, their word seems genuine (and usually is as they would have tried the product first).

How much do Nano Influencers earn?

A report from eMarketer shows that nano-influencers, defined as having between 500 and 5,000 followers, make an average of $315 per YouTube video.

How to find Nano Influencers?

You can find nano influencers by adding specific terms while you search. Example: On Twitter, you can search for an additional keyword along with a hashtag. In this case: #nanoinfluencer beauty 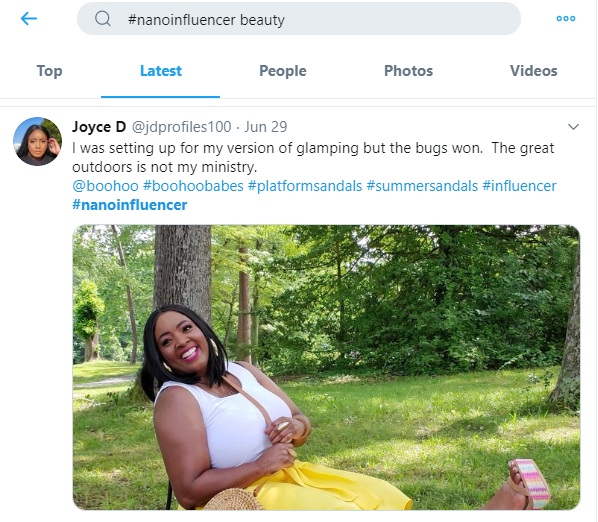 On Instagram, you can follow hashtags and look at posts which have them. You can choose between recent and top posts for any hashtag. 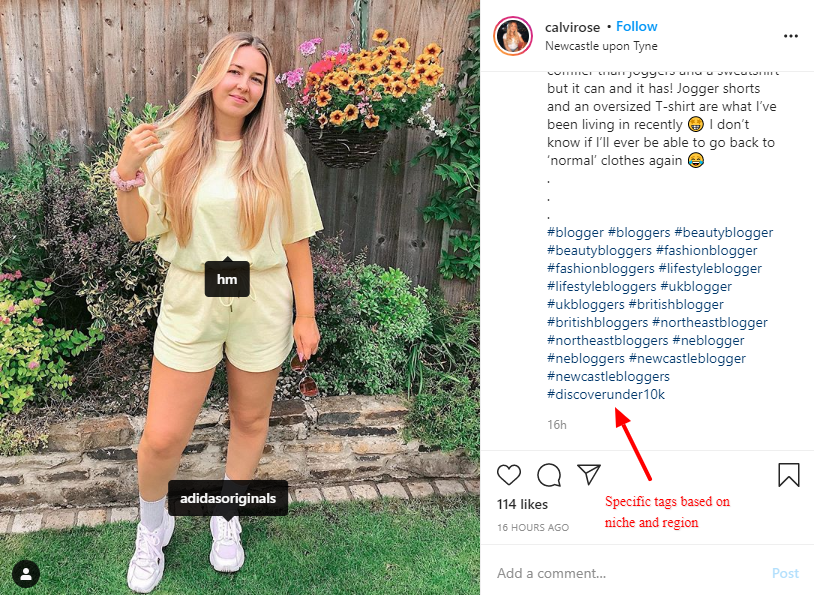 Additionally, You can also search for #nanoinfluencer on Instagram and pick the ones that suit you.

Use a social media listening tool to monitor brand mentions. Social Listening tools monitor and analyze online conversations about your brand, any specific topic, your competitor mentions or anything else that’s relevant to your company. These tools are able to pull in mentions of specific keywords and helps marketers analyze mentions. These tools don’t just measure social media, they are able to pull in posts and comments on blogs, forums, and websites where the information is made public. This should tell you who is talking about your brand and who you could reach out to.

Here are some useful Social Listening tools in 2020.

Awario: Awario is a relatively new tool that lets you monitor mentions of your brand, competitors, industry and even lets you detect plagiarized copies of your content, find linkless brand mentions that you can turn into links, and monitor new backlinks to your site. You can use Awario to monitor Facebook, Twitter, Instagram, YouTube, Google+, Reddit, blogs, and generally the web.

Agorapulse: This tool will find @mentions as well as comments on your social media posts, plus allow you to search for keywords of your choice across Twitter. The tool also lets you identify influencers within your audience. It has a built-in CRM that lets you create lists of prospects and influencers.

While Social Listening is definitely powerful it can be a time-consuming process when you want to find Influencers.

One of the easiest ways to find Nano Influencers or any Influencer is to use Influencer discovery tools.

Social Animal: This is a uniquely powerful tool that lets you find Twitter Influencers based on the content they share as opposed to finding Influencers using keywords from bios.

There are three ways to find Influencers using Social Animal.

Upfluence: Brands can search Upfluence to find influencers using any combination of relevant keywords. They can then drill down and refine their selection of influencers. The tool even lets you weigh your keywords, placing more emphasis on some than others. You can also filter by audience data, including psychographic attributes like cultural interests and brand affinities.

Take a look at some of the best Nano Influencer marketing campaign examples:

The current marketing landscape highlights how millennial and Gen Z consumers want to interact with brands and influencers that lead to content that they can rely on, trust and value.

Nano-influencers are the future. No matter the size of your brand, these influencers are effective and efficient. They can be relied upon to increase your brand awareness and build a loyal community. As media becomes more fragmented, the role of the nano- and micro-influencer will become even more important as brands look to target a specific niche in the market.

How To Become An Influencer In Any Industry?